Home Africa Marie-Claude Lovisa: Only white woman who rules as queen in Africa

A White woman has become the first from her race to be crowned a queen in Africa ruling over villages.
Marie-Claude Lovisa is the only white woman who rules as queen in Africa. She was crowned Queen Mawulolo (“God is great”) about 15 years ago by the people of Togo and rules over Lovisa Kope, a cluster of 11 villages, or 4,000 people in the north of Lome.
The village is made up of mostly locals who make a living by farming or grazing. She has a crown, throne and village named after her by the people of Togo, a West Africa country made up of over 5 million people.
Lovisa revealed in an interview that she traveled to Togo for the first time to spend a few therapeutic weeks in the heat of Lome. But, when she arrived, she fell in love with the country. After her first visit, she quickly returned three months later for another look. Eventually in 2000, she decided relocate to Takpla where she started her humanitarian work. 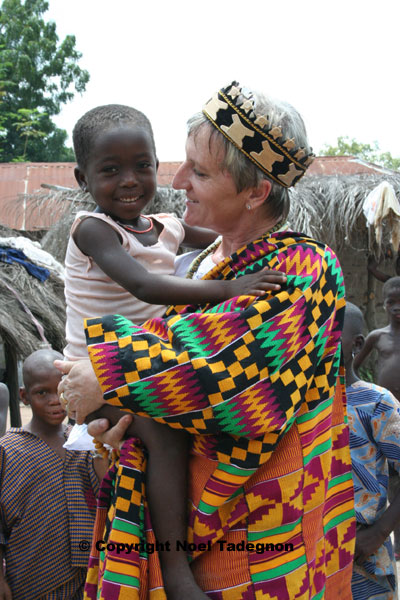 Photo credit: Noel Tadegnon
After her coronation in 2004, she went on a two-week retreat, during which she took part in a whole series of rituals. The village of Takpla was renamed “Lovisa Kope” in her honour during her coronation, which means village of Lovisa, in the Mina language.
“This woman has enchanted us since she arrived here. She has changed so much and we are so proud of her.” said excitedly Teko, a village elder in his 70s as he sipped from a goblet of palm wine in an interview.
“Thanks to this ‘yovo’ (white woman), our children go to school, we are sometimes given free medical care in a health clinic — and the neighboring villages are jealous of us!”, said Ahlonkobagan, one of Teko’s wives.
Before her journey to Africa over 20 years ago, the French woman worked as a computer scientist in Lyon. Since she was crowned, she never goes out without her crown as she has come to cherish the privilege and opportunity bestowed on her by the people.
While appreciating the opportunity in an interview with Reuters, she said: “I was crowned traditionally, something really extraordinary for a European, a white woman in Togo.” 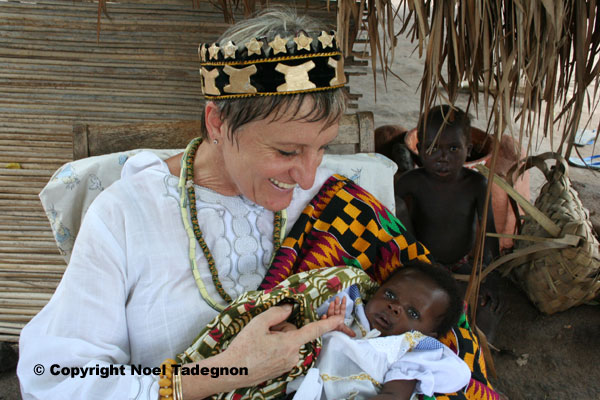 Her good heart and desire to help the people of Togo endeared her to the locals who felt compelled to make her their queen.
A philanthropist extraordinaire, Lovisa takes care of orphans, has built a health center and pays for the children’s education. She even embarked on a campaign to stop her subjects from partaking in any voodoo activities. Togo is said to be the birthplace of the voodoo religion. How she will be able to achieve this aim is yet to be seen.
A report by Reuters revealed that Lovisa built the settlement’s first health centre, and tours the village to urge people to take advantage of the clinic’s free medicines and stop relying on witchdoctors.
“I realised that people weren’t going to hospital because it was so far from the village and they preferred to treat themselves traditionally, which prompted me to install this health centre with help from friends in Togo and Europe,” Lovisa told Reuters. 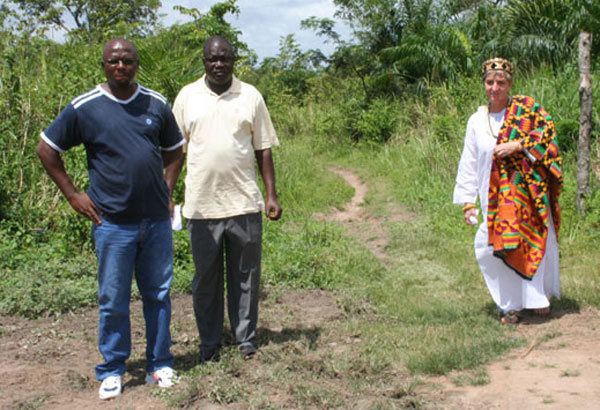 “The women here, we are proud to have a woman as village chief. She has done a lot for this village. She is our sister,” said elderly villager Amah Eklou.
Lovisa has adopted 10 children who live on her farm and she regularly organises the distribution of clothing to local people.

Role of Agriculture In Building Economy of A Country